Overweight and Obesity are two words that has been used very commonly nowadays. We have seen many people using them interchangeably too. But they are different. What are the similarities or differences between overweight and obesity? What are they? Let us sink deep into these subjects and understand what exactly overweight is, obesity is, what its causes are, how to determine overweight and obesity, its similarities and also differences. While learning this, Body Mass Index is non-avoidable, and thus has explained that too.

Overweight is the weight that is more than the normal weight. There is a specific limit for the weight to increase according to the age and height of a person. The weight that is more than that specific limit is overweight. Fat is required by the human body for the proper functioning of the all systems such as reproductive, immunity, energy release etc. But this same fat when becomes excess than that required, then that person is said to be overweight.

Causes of Overweight or Obesity

The causes of being overweight or obese can be similar. The imbalance with the calorie intake and metabolic rate can be the main reason for being so. The whole world is behind the reasons of being fat. But the hardest and funniest fat is that, when we look into the world, we tend to forget to look onto ourselves gaining weight.

Let us look into the main causes of being overweight or obese:

How to determine Obesity and Overweight?

We were continuously talking about excess weight and normal weight. But how to determine whether you are obese or overweight? The only answer to this is Body Mass Index. This chart helps to know where you stand.

Let us have a look on to the Body Mass Index:

What is Body Mass Index?

Body Mass index is the measuring of body fat by calculating with one’s weight and height. BMI is universal and it has a unique way to calculate it. It has a chart that determines and classifies the group to which each individual belong. It is under weight, normal, overweight and obese. By deriving such a body mass, it is easy for a person to understand in which class he/she belongs.  Refer the body mass index table image given below: 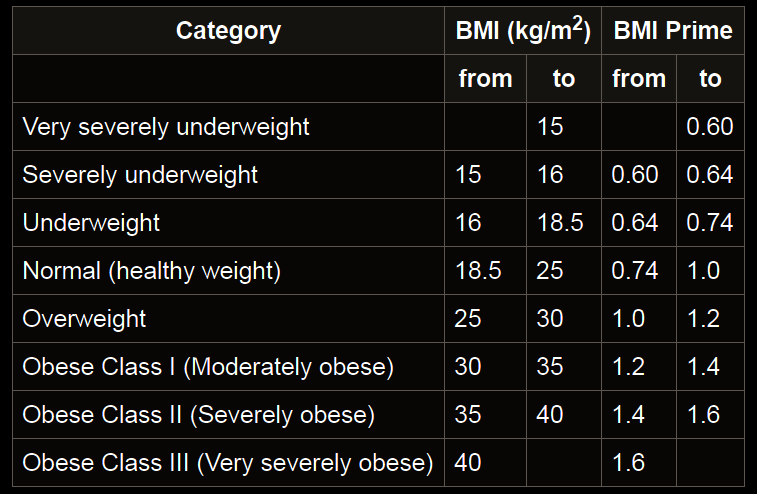 How is BMI calculated?

The Body mass index thus calculated can be compared with the help of the table, which is given above.

Body Mass Index idea evolved from the Quetelet Index of Obesity, which was formulated by Mr. Adolphe Quetelet during the eighteenth century.  Adolphe Quetelet was a Belgian who was famous as an astronomer, statistician, mathematician, and sociologist too.

Later in 1972, Ancel Keys in the Journal of Chronic Diseases came up with the term Body mass Index and it formula. As the obesity was going high day by day, the term obesity and its measurement also attracted much significance. The formula for finding BMI was quite simple and that simplicity has made it wide spread.