What is Tire Recycling? Its Importance, Process & Benefits

What is Tire recycling?

Rubber recycling is as old as the industrial use of rubber. In the early 1900’s rubber cost as much as silver and therefore was valuable. It was good sense to reuse as much of this product as possible. Towards the middle of the 20th century cheap oil imports, use of synthetic rubber and development of steel belted radial tires caused the decline of the rubber recycling.

But now the tire recycling industry is seeing tremendous growth thanks to the legal framework that requires the safe disposal of scrap tires and innovative economically viable applications for recycled rubber. 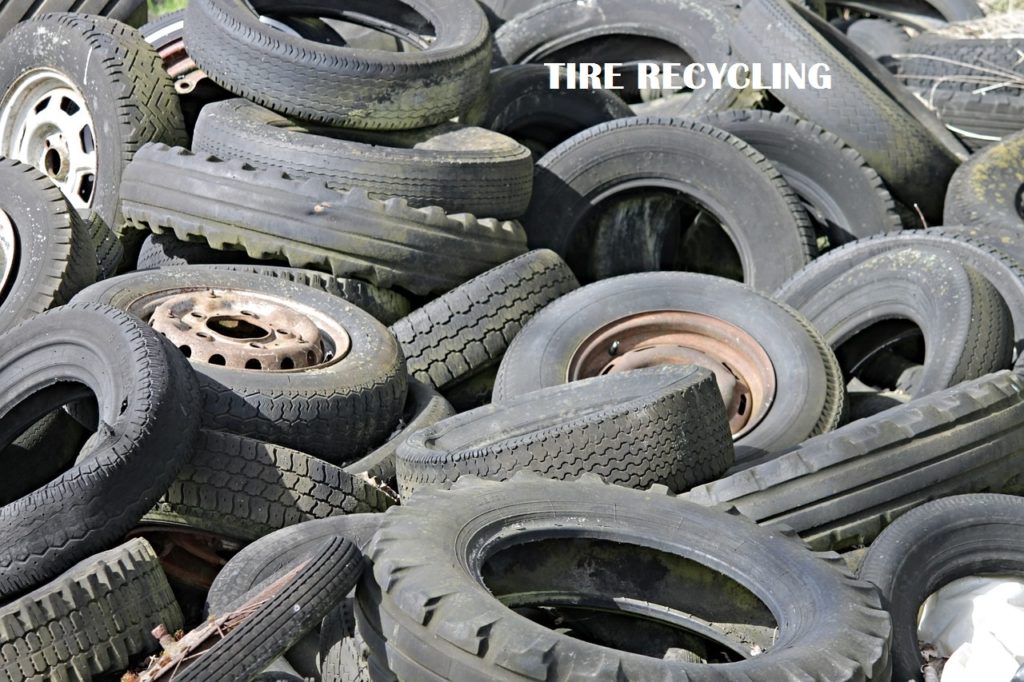 The machinery used to shred rubber tires is fairly complex and expensive. The most common machine used is a rotary shear shredder with two counter rotating shafts operating at low speed 20-40 rpm and high torque.

Tires are pre-shredded into strip like pieces. Some operators prefer to first split the tire into three pieces and get the steel belted portion of the tire separate from the tread part of the tire. This is done so that the 1 inch thick steel beads can be removed from the tires. De-beading reduces wear and tear of the shredder, granulator and other machines.  Finally the parts are shredded to large pieces.

Removal of the steel and textile fibres

As the material is shredded to smaller size in the granulator, magnets are used to remove the smaller steel fibres from them. A combination of shaking screens, wind sifters and low vacuum suction is used to remove the polyester fibres at a different stage. Steel and textile fibre constitute at least 30% of the tire.

The residual rubber granulate is crushed to coarse powder (0.6-4.0) mm and is ready to be used in different areas.

The same process described above can also be done by subjecting the tire to low temperatures. The process is called ‘cryogenic’ because the temperature here can go as low as -80C -120C. Granulate or the whole tire is cooled to -120C and it becomes glass hard and brittle. It is crushed or ground to a fine size of 50-250 micrometre in special mills. This process requires less energy and less machinery than the regular ‘ambient’ process. It is also easier to liberate steel and fibre from the rubber using this process giving us a cleaner product.

A drawback of this system is the additional expense of using liquid nitrogen, the coolant.

The high quality rubber product thus formed is used in a variety of industrial and chemical processes for production of compounds and corrosives.

Pyrolysis is a thermo chemical process where organic substances are broken down using high temperatures in the absence of oxygen.

Tire pyrolysis a method of tire recycling where the residual product is a fuel oil that can be used in industries such as steel, iron and boiler factories, ceramics, power, chemical industries and hotels and in generators to produce electricity.

The waste whole tires are put into a reactor and sealed tightly. The reactor rotates slowly. The reactor is slowly heated using coal, charcoal, fuel, gas, wood etc. The rubber softens and the rubber polymers break down into smaller molecules which eventually vaporize and exit from the reactor. The oil gas coming out of the reactor then goes into the condensing system and becomes liquid oil. The residual gas which does not get liquefied is directed back to the combustion system. It is used to heat the same reactor as fuel, thus saving energy.

The smoke that is produced during the process can be filtered and treated to remove all pollutants before releasing it into the atmosphere. Hence tire pyrolysis is considered an environmentally friendly manner of recycling tires.

When oil production is complete the temperature of the reactor returns to normal. The residue of this process is carbon black and steel wires.

The carbon black is used in construction and as a low grade fuel. Recycled or recovered carbon black is treated and becomes a high value product used as filler in the rubber industry, paints and coatings, ink production and other industrial applications.

The steel wire is recycled to produce new steel products.

Traffic safety is increased due to its better de-icing properties and skid resistance.

They have been used successfully as lightweight fill for embankments and retaining walls, leachate drainage material and alternative daily cover at solid waste landfills, insulating layer beneath roads and behind retaining walls.

Innovations in tire recycling methods and discovering new applications for recycled rubber and its other by products will help the recycling industry to grow at a fast rate. Though the energy recovered from recycling tires is 3-4 lesser than what was expended into making the tire, still the advancements made in obtaining clean fuel is an advantage that countries are making use of. As more applications are discovered, there is hope that one day recycled rubber can be reused for the purpose of making new tires again.