Top Solar Panel Manufaturers to Watch Out for in the USA

The demand for solar energy has seen an immense increase – it has risen multiple times, right from being a fringe interest of a few handful of environment lovers to becoming an option in renovation and office and home constructions. However, the ones in the United States also face stiff competition from their Chinese counterparts like any other solar manufacturing firm in the world. 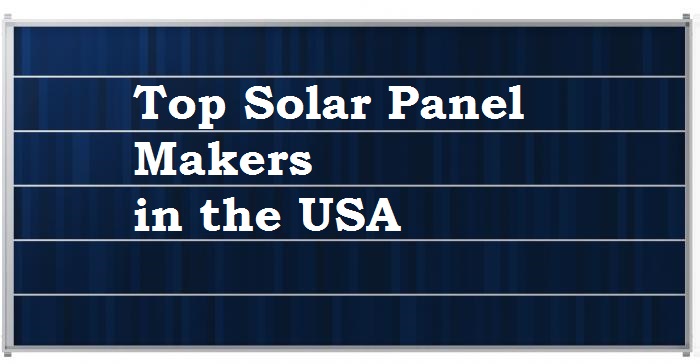 As per global rankings and market share, following is the list of top 8 solar powers in the United States:

Headquartered in Tempe, Arizona, First Solar was founded in 1990 and is currently one of the top solar panel manufacturers in the United States. First Solar is engaged in manufacturing of rigid thin film modules (solar panels), and is also one of the biggest providers of utility-scale photovoltaic power plants and supporting services such as finance, construction, maintenance and end-of-life panel recycling.

The expertise of Greenshine New Energy LLC lies in manufacturing and developing customised solar-powered lighting systems. Greenshine New Energy is based out of California and offers a host of lighting applications apart from specialising in solar street lights, garden lights, and lawn lights for outdoor activities.

Evergreen Solar is one of the top PV firms in the US and specialises in string ribbon technology. The company’s operations were based in Marlborough, Massachusetts, USA and in 2007 it announced that it was about to widen their production capacity from 17MW to 100MW.

Grape Solar is a known name when it comes to marketing and manufacturing of solar photovoltaic modules in USA. Grape Solar is engaged in importing full line of solar PV modules for a host of on grid and off grid applications.

Originally founded in Germany in 1988, SolarWorld has its biggest business facility in North America. SolarWorld is the primary supporter of SolarWorld No 1 solar car, manufactured by the FH Bochum SolarCar Team.

SunPower Corporation was founded in 1985 and is headquartered in San Jose in California, USA.

The company is engaged in designing and making, roof-tiles, solar panels based and crystalline silicon photovoltaic (PV) cells on an all-back-contact solar cell technology, which was conceived at the Stanford University.

SunPower Corporation has achieved many feats and one of the biggest includes acquisition of PowerLight Corporation – a leading global provider of large-scale solar energy system, in January 2007.

Though CentroSolar is headquartered in Munich, Germany but the firm has strong and deep root in the USA as well. The company has made its mark in the solar power industry with their innovations and designs for more than 20 years.

CentroSolar has been providing solar solutions to businesses and homeowners with providing solutions such as solar module technologies, financing, engineering, and installing of panels for houses and businesses.

ReneSola has been a known name in the manufacturing of solar panels since it was founded in 2005. It has been supplying PV modules to several countries have been providing the green-energy products and on-time services for EPC, installers and green energy projects for businesses.