Solar power manufacturers in developed nations such as the US, the UK etc have not been able to compete with their counterparts in China, thanks to its aggressive step into renewable energy, which has given a major push to its market.

According to recent data, China has outpaced all its competitors and has become the largest investor in the domestic solar energy sector, by having pumped in US$103 Billion in the entire renewable energy sector.

We have listed the top 10 solar panel or photovoltaic (PV) makers in China. 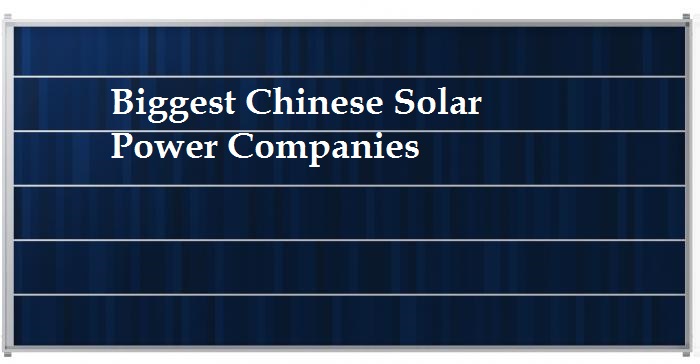 Trina Solar Limited is based out of the province of Jiangsu in China and it has several branches in the United States, Europe and Asia. Founded in 1997 Trina Solar has been world’s largest solar panel maker after it surpassed its rival Yingli.

Trina Solar’s list of services includes the production of ingots, wafers and cells to the assembly of high quality modules and an integrated supply chain.

China Sunergy is one of the biggest Chinese solar cell products manufacturers, which is based out of Nanjing in Jiangsu, China. China Sunergy’s expertise is in making solar cells out of silicon wafers.

Though it has its major customer base in China, but the firm also sells their products worldwide.

JA Solar Holdings has its roots in Shanghai in China. The firm designs, develops, manufactures solar cell and solar module products and sells the as well.

The operations of JA Solar Holdings are based in the People’s Republic of China.

The firm is also engaged in making and selling of monocrystalline and multicrystalline solar panel cells. Apart from selling their products locally, JA Solar Holdings is also into the selling of its products to customers in Spain, South Korea , Germany, Sweden, , and the United States too.

JA Solar was founded in 2005 and is based in Ningjin, in the People’s Republic of China. The firm gets a big share of subsidy from the Chinese government.

Motech Solar is a subsidiary of Motech Industries Inc with its headquarters in Tainan, Taiwan. The firm was entitles as the 6th biggest producers of solar cells in 2007.

Motech Solar is engaged in the manufacture of solar cells, photovoltaic (PV) modules, PV inverters, PV systems among others.

Motech Solar was founded in the year 1981 as a designer and manufacturer of test and measurement instruments before it went on to become a pioneer in manufacturing polycrystalline silicon solar cells in Taiwan.

The firm is currently ranked one of the top 10 solar cell maker in the world.

Founded in 2001, Suntech Power Holdings Co Ltd has its roots In Wuxi, in Jiangsu. The firm claims to develop, manufacture, and deliver the world’s most reliable and cost-effective solar power solutions.

Suntech Power, has so far, supplied photovoltaic panels to over thousands of customers in at least 80 countries. Suntech Power’s performance was at its peak in 2008 and seen a decline after that in the wake of a glut in the market for solar power products.

Suntech Power has been a supplier of solar modules for several solar energy plants and systems around the globe.

Officially known as Yingli Green Energy Holding Company Limited, the firm was found in 1998. Yingli Solar is one of the largest solar panel manufacturers in the world with a photovoltaic module capacity of 4 GWs.

Headquartered at Baoding, in China Yingli has over 30 regional branch offices and subsidiaries. Yingli Solar has made the distribution of more than 15 GW solar panels to its customers across the globe. Notably, Yingli Green Energy began production of PV modules in 2003.

It is pertinent to note that according to HIS, Trina Solar is the top shipper of solar panels (in 2014), which was followed by Yingli Green Energy and that both the companies are based out of China.

China, over the past few years, has dominated the solar power equipment manufacturing business and shipments as well.

Jinko Solar is one of the biggest PV maker in China, which has six productions facilities in Jiangxi, Zhejiang and Xinjiang Provinces of China. Its other production facilities are located in Malaysia, Portugal and South Africa while 16 other overseas subsidiaries are in Japan, Singapore, Turkey, Germany, Italy, India, Switzerland, and Spain.

Jinko Solar distributes its solar power products and sells its solutions and services to a range of international utilities and commercial and residential customer base in China primarily. Jinko Solar has been doing business in the United States, Japan, Germany, the United Kingdom, Chile, South Africa, India, Mexico, Brazil, the United Arab Emirates, Italy, Spain, France, Belgium, and other countries and regions as well.

SFCE Solar is also engaged in research development and operations of other forms of green energy.

Hanwha Q CELLS Co Ltd is also a renowned and one of the world´s biggest and most recognised photovoltaic (PV) manufacturer, which is known for its high-quality, high-efficiency solar cells and solar modules.

The company has international manufacturing facilities in South Korea, Malaysia and China.

It is pertinent to note that according to HIS, Trina Solar is the top shipper of solar panels (in 2014), which was followed by Yingli Green Energy and that both the companies are based out of China.

China, over the past few years, has dominated the solar power equipment manufacturing business and shipments as well.