While we see the mother earth suffering and started kicking us back, we have been torturing her more and more. Overpopulation is one among the major reasons for exploiting earth and nature. Let us see what overpopulation is, what are the causes and effects of overpopulation and also methods to control overpopulation.

Homo sapiens commonly known as human beings have evolved 130,000 years ago. Initially the growth was very slow, the life expectancy was low and death rate was high because of diseases, climate change, lack of proper sanitation, illiteracy, poverty and lack of vaccination. But by early 1800’s there has a steady and quick growth of population. This was because of the improvements in the health, growth of science, awareness of hygiene among the people, discovery of vaccines, literacy, proper waste removal and effective nutrition. All these increased the life expectancy reducing the death rates. Now the human population is growing at a rate of 78 million people per year i.e 7 billion people exist now. As per the experts the population will touch 15 billion by 2100. 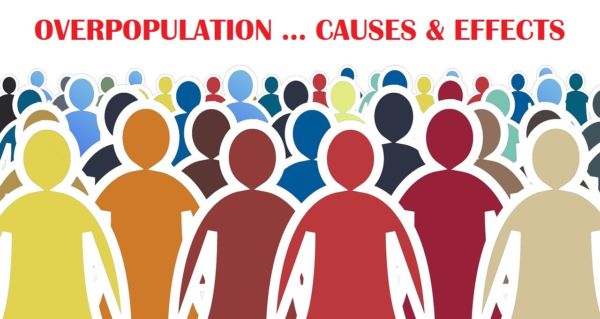 “Humans are 10,000 times more than common than we should be.” Over population is one of the gravest issues affecting mankind. Overpopulation can be defined as a situation where in which the number of humans existing exceeds the normal carrying capacity of the earth. It is not just population density but a crisis in which more number of people are present to use the resources which are scarce. Over population is the major reason for other environmental issues like global warming, pollution, resource scarcity, deforestation and soil erosion.

CAUSES FOR OVER POPULATION

EFFECTS OF OVER POPULATION

To conclude, overpopulation can prove to be harmful to human resource. It can also lead to other major environmental issue like global warming and ozone layer depletion which will wipe out humans completely from earth. As the saying goes “Its better late than never” i.e if we start working collectively towards reducing the population now, the future generations will be benefited thus saving the mother earth.